As you all know I have my Animal Communication Practitioners course coming up at the end of October. I'm so excited! It's going to be great meeting like minded people & practising what I love.

As part of the course I need 10 animals to complete 10 case studies. I have about 6 cats & was hoping for some dogs, rabbits, rats, quinea pigs, budgies.... anything!

Thank you
Posted by Gemma - Animal Communicator at 05:56 No comments:

What is Animal Communication & How does it work?

I've chatted to many people about Animal Communication. Some look at you like you're crazy (understandable really), some are intrigued & some are like minded & are excited at the prospect of being able to better communicate with their pets. There are also the synics but I'm not doing this to prove anything to anyone so I don't waste my time on worrying about them.

It occured to me that this Blog can look a little weird to people who haven't chatted to me as it looks like I sit down with an animal, write a load of stuff on my Blog that they've 'told me' & expect people to know what it's all about. So I've decided to write a little on WHAT animal communication is & HOW it works. That way you can make up your own mind on what you think of it all. If you have any further questions though I love talking about it so get in touch.

What is Animal Communication?

Animal Communication is a form of communication between a human and animal based on feelings.

How does Animal Communication work?

We all have feelings including animals. During a communication I quieten my mind to pick up on the animals feelings, I then interpret the information I receive to the animals owner. We all have the ability to communicate in this way but over the years have forgotten how. Have you every been upset and noticed that your pet has picked up on your mood? This is because they've picked up on your feelings as they're very sensitive creatures.

To communicate with an animal all I need is a photo of them, their name, age and gender. It works best if their owner is on the phone or in front of me whilst I communicate as it turns into a 3 way communication with the animal, owner and myself.

There's nothing spooky about it, it's a completely natural way of communicating & just because animals don't have a voice it doesn#t mean they can't communicate. Us Humans could learn a lot from animals if only we let our barriers down & opened our minds.

Well that's the basics! There's not much to it is there!? So if you get a 'gut feeling' that your cat isn't feeling quite himself then that's him communicating with you so listen.
Posted by Gemma - Animal Communicator at 05:46 No comments:

This communication was ANOTHER first for me. My Dad & I were chatting on Skype when he told me that him & my Step-Mum Wendy were going to re-home a Newfy called Toby - to add to their Pack (Brenna (another Newfy) & Lucy (a crazy St Bernard) as seen here with my Dad: 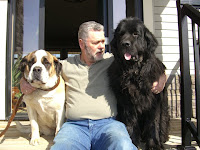 So I carried out the communication before they collected him & so I have the feedback of Toby's previous owner (in red) & my Dads (in blue).

Throughout the communication Toby's energy was not that strong. He did give me the impression he was holding back a bit, he seems to have quite a lot on his mind & is possibly a little confused.
He is a very laid back dog and if I could describe him, it would be as not having a lot of energy.  I even took him to the vet about a month or so ago because I found him to be lethargic - they said that it was the heat and that he was in good health.
He realises that he is being re-homed, he knows however that you all love him & he loves you all too. He realises you only want to do right by him. When I refer to his ‘leaning up against you’ it lightens the mood & he seems happy at the memory. He knows that he made you feel safe.
It does give me peace of mind to know that he understands why he is being rehomed and that he thinks it will be a nice home.
When I ask him to describe his character he comes back with bouncy & fun, a lovable rogue! When I question the ‘rogue’ part he says that sometimes he can be a bit feisty. When I question the charging at the fence & people he says that he’s confused. He doesn’t know when people are coming to see him and the family or coming to hurt you all. He sees his job as protecting you all but doesn’t seem to know when people are a threat of not?! I asked him what he’d like people to do when they approach to show they are not there to harm him or his family & he simply asks that whoever approaches says his name – that way he knows that they know him & his family. He said if they say his name he’ll ‘back off’. So Dad & Wendy when you approach him tomorrow before you enter his home simply both say “hello Toby”, see what happens.
Feedback from Dad: Wendy walked up the drive and just said “Hello Toby”, walked into the yard & straight up to 'Tobes' - not a grumble or hint of aggressive behaviour!  I got out of the Jeep and walked up the drive, & Toby trotted down the fence line, I did the same as Wendy, “Hello Toby dog”.  He just wagged his tail, again, no hint of aggression. So, both of us in the yard & his owner is dumbstruck!  I mentioned the charging, & she kept insisting he did and this was very unusual/strange.......
I explained about him being rehomed, described you both Dad & Wendy & the dogs. I told him that there is a hierarchy & Dad is the leader. To that he says “So he’s the Boss?” He seems quite shocked by this but accepting. I told him that it’s for him, Brenna & Lucy to sort out their hierarchy but as far as the home is concerned Dad is the Alpha Male & Wendy the Alpha Female. I gave him a mental image of all of you & your home. He says it seems like a nice home.
I asked Toby what you can all do to help him settle in & he said “I like the TV on” “I love the TV”, I get an image of him heading straight to the TV & plonking himself in front of it. This makes me laugh! He also says “A bed of my own”. He’d love to take his own bed. He tells me “It’s oval & squishy” but when he shows me a mental image of it I see a rectangular padded bed & him spilling over it. I also get the word “Cheese”. Dad & Wendy may-be give him a little as a treat to welcome him into the family? He tells me he was a little nervous about his new home but not so much now.
The last few days he has been sleeping in the house and I have even had to kick him outside in the morning....this is not like the usual pacing at the door to get out.  He has almost changed to wanting to be inside the house instead of outside.
It is funny about his bed, because at the moment he has been sleeping on a rectangular dog mat in our porch and his paws hang over the side...he usually chooses not to lay on the mat, but takes the floor instead...I always thought that maybe it was cooler on the floor.
As for the treat, the very first thought that came into my head was that he has never had any cheese...but when I started to think of it, that is what I give him to make him take meds from the vet (I hide them in cheese slices and he woofs it down)...I never really thought of it as a treat:)!

When I ask him what he likes to do he says “I like to do tricks”, I see him flick something off his nose & I see him stood on his back legs with his front paws in the air. He also said “I like to go sniffing in the dirt for stuff”.
As to the tricks, I have been working with him to flick his treats of his nose (I have yet to see it done correctly - he always flicks it over his head, it's funny, but I still try).  I've never seen him with his front paws up, that is unless he is hanging them over the fence greeting me when I come home.

I haven't noticed him sniffing around, but there have been a few skunks around the house, that somehow he seems to track down.  He does seem to pick up on the scent of moose - if we are quadding and let him run, if he catches a scent (when we have followed, there are always moose tracks) he takes off into the bush and is on the scent...he always comes back home, even without being called!  If he is given a bone, he does like to try and bury them, very rarely will he start to chew on it when it is first given to him.
The final image he gives me is that of him herding up Brenna & Lucy.
Thank you Gemma for doing this for Toby, Your Dad and Wendy.  I hope that this helps him with his journey!
Feedback from Dad: Toby’s owner told us that Toby hadn't been near her all day. They have a deck at the front of the house and he usually goes up there, but yesterday he hadn't been there all day until we arrived. It's as if he knew we were coming.
So off we set then,  I put him on a lead & he came down the drive with me without hesitation.  I jogged to get him going to jump into the Jeep - not a chance.  He did exactly what Brenny does, hopped up with front legs, then looks over his shoulder for a bunk up, lol. The trip home - about 2 hours - was uneventful, he slept most of the way. He'd occasionally get up, take a look then lay down again. Very much like Celt would do.
Meeting the girls was dead easy, they all sort of got on together.
Toby is a wonderful big bear of a dog, an absolute delight! Thanks for your help, I'm sure your intervention helped, and I think it would be a great idea to chat to him again later to see how he is settling in.  It's almost as if he now knows where he fits in & what is expected, so he can relax & just be 'Toby'..................