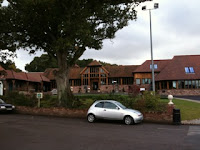 What a weekend! The first part of the ACT2 course was at Old Thorns Manor Hotel, Liphook, Hampshire this weekend & I got back last night at about 9pm - exhausted but still buzzing!

There were a large group of us & we all got on so well, I know we all shared Animal Communication (which isn't a very common thing) but we were all really down to earth too so we had a lot of laughs.

The venue & food was lovely & so were James & Shelley who lead the course. We packed a lot of information into the weekend so heads were hurting but on day 2 we got to put it all into practise & communicated with each others pets. I was fortunate enough to communicate with James & Shelley's cat Jack & Miranda's horse Bird - they both had such lovely characters and a lot to say. The experiences solidified for me that this is my vocation in life. I was really excited when Shelly quietly said to me "You're really good at this" :o)

I now have 1 month to carry out my case studies & just need 3 more, I'd like to do more if they come my way. I've also got a clearer view on how I'm going to market Pets Tails & am looking forward to putting that into action.

Along with this huge step in my life we might be exchanging contracts on our house this week & moving 3 weeks after! Don't like to do things by halves do I. I'm hoping the house we rent will be peaceful and tranquil - giving me the best environment to work in.

Anyway - must go & do boring work but I'll be keeping you updated on my case studies & moving house!

Bye for now x
Posted by Gemma - Animal Communicator at 01:05 No comments: 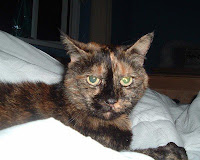 I communicated with Smudge, our friends lovely 18 year old cat back in June this year. She was the first animal that I have ever had a 'face to face' communication with and initially I wasn't too confident with how the communication went. During the communication she snuggled up to me and seemed to love the attention. She communicated that she was feeling tired and a bit achey these days, she was a bit sore around the back legs and sometimes felt sick when she ate. She seemed to be happy although tired but not ready to pass. I felt instinctively at the end of the communication I had to tell her that when she was ready to pass over and wanted to communicate this to her owners Jamie and Libby to send me a sign.

Libby later told me that the information Smudge had given us about feeling sick when eating had helped the vet diagnose an illness a few weeks later and she was put on medication. I felt that the communication hadn't been a failure as I'd first thought and I was really pleased that it came in useful.

A week or so ago and my other half gets a text from Libby saying that Smudge was due to be put to sleep the next day and could I communicate with her as Libby felt she had something to tell her. I tuned in with Smudge's energy and it was very weak, she was ready to pass and wanted Libby to know how much she'd loved her long life with her, but it was time to leave. Libby was obviously very upset and Smudge was too, but she told me to tell Libby that very soon after her passing Libby would feel her presence on the bed. Smudge wanted to make it very clear to Libby that she wouldn't be there in body anymore but her spirit would always be with her. I felt very sad for Libby having had 5 cats pass over in my lifetime but I didn't feel sad for Smudge as her spirit was ready to leave her tired body.

A few days after Smudge passed over I received a text from Libby saying that Smudge had visited her after her passing and she thanked me for helping and making the grief a bit easier to bare.

I'd like to thank Libby, Jamie and Smudge. Smudge was a beautiful girl with a beautiful soul and Libby was very fortunate to have her in her life from a kitten. This experience has confirmed to me how amazing Animal Communication is. We can help animals in their life but can also be a big help to them and their owners when they pass, and even afterwards when they're in Spirit. It was a real priviledge to help Smudge and her owners at this very important time in her life.

Quit the 9-5 & everything's falling into place!

Last Wednesday I finally did it, I quit the job that no longer fulfills me. It felt so good, I recommend it to anyone that's just staying in their job out of fear - fear of being skint!

Since then everything's moving in the right direction & falling into place. It's amazing how everything goes the right way when you let go of the things blocking you.

I'm so looking forward to my new lifestyle (I'm not calling it a job as it won't be)!

Another reason I'm so upbeat is because I start the first half of my Animal Communication Practitioners Course this weekend & am looking forward to meeting lots of like minded people & having a laugh. I'll let you all know how it goes. 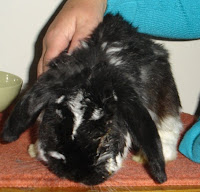 Communication:
Trevor lives with my Reiki Master and so I have met him on two occasions. He’s an old boy and his owner Jen just wanted to make sure he was happy, and to see if there was any more they could do to make him comfortable. Trevor lives inside and is restricted to a certain area as he can no longer control his bowels. Jen is grooming him for short periods of time and also wanted to see if there was a way of making this experience more pleasant for him.

Trevor simply requested to be taken outside the front once a day to get some fresh air, see what’s going on and spend some time with Jen. He didn’t seem keen on the grooming but we came to a deal that he will get his ‘treat’ of going outside once he’s groomed. Jen was just to say Treat Time to indicate when he was due his daily treat.
Feedback:
Trevor and I have settled into our routine. He takes no notice of me saying Treat Time so it’s become a case of grabbing him at the appropriate moment. Weather so far has been kind to us but he definitely is enjoying sitting outside - may I add as far away from me as possible - so much for the shared time! However I do sit with him or keep an eye on him while he has basked in the sun.
Trevor is like the naughty child. He has never enjoyed being outside before, only going out as far as the doorstep so makes me look mean by going out and enjoying it! I don't mind though I'm glad he has something he wanted to do and is finally doing it.

Trevor by the way has found himself a nice routine outside, he has on odd occasion come to me for a fuss or even a grooming.  Generally if the sun is shining he will find a sunny spot and go to sleep while I look out for neighbours that are likely to stand on him!  lucky for him (and me) there is no loose cats or dogs in the neighborhood.  Now of course the weather is getting much colder and I will start to feel I'm letting him down if we don't go out.  By the way, going out with him is also good for me as I tend to sit with a cuppa and stare into space for as long the weather is bearable.
Many thanks for your help Gemma it is much appreciated.
Posted by Gemma - Animal Communicator at 10:33 No comments: 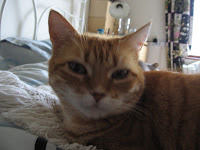 When I first tuned in with Daisy I was instantly drawn to her chest area and felt it needed some healing. Throughout the communication I also felt a physical blockage in my chest area (similar to when you have a cold and you’re trying to cough something up but it doesn’t move). I didn’t feel worried but I felt her emotions; frustration and anxious. Her owner confirmed she also felt these emotions so it may be possible that Daisy and her owner are bouncing off one another. Daisy put in a few requests: To have her food bowls raised, to be fed separate and to have some sort of oil given to her (like a cod liver oil capsule) to soothe her throat. Daisy’s owner asked if there was a way she could make a trip to the vets more comfortable as this was not something Daisy enjoyed! Daisy requested soothing music, to be sat in the front and not the back, and to be talked to. Daisy seems to be less than happy with the attention she gets from one of the other cats in the household but I felt this wasn’t malicious but she just needs reassurance from her owner that she’s special by spending some special time alone with her owner and to be fed separately. When I asked Daisy if she’d like Reiki healing again she said yes but from her owner.

A bit of feedback for you - I put Daisy on the passenger seat as suggested with some Gregorian chants on the CD player(!!)  and she was loads better than normal.  The vet has diagnosed 'sinusitis' which is triggered after coming into contact with a cat who's had catflu or something like - this I suspect is from my old stray Tom.....  The vet had a good look in her throat and felt all around there, said there was no blockage or she wouldn't be able to eat which is obviously not the case as she is quite a big girl, he couldn't feel any other lumps or bumps and said he wasn't particularly worried about her because of her size - due to good living as he called it!  He confirmed what you had said in that he felt it didn't particularly bother her, but we're back on antibiotics so we'll see how we get on.....  We've had some nice cuddles, but she wasn't interested in the cod liver oil at the moment - will see if the others like it as I'm sure it's good for them anyway.

Thanks so much Gemma for your input, it was really helpful.

Pam and Daisy
Posted by Gemma - Animal Communicator at 02:56 No comments: